Hey! Many of you have asked me about Zero and where she came from, how old she is etc. so I wanted to write a post and answer as much as I could for you. Also, she’s my heart dog so she totally deserves a page all to herself. 🙂

Why we got her:

When Dylan was younger he started going through that phase of wanting a little brother or a sister. Well, since I didn’t wasn’t even dating at the time, I knew that wasn’t going to happen so I figured it was time for a dog!

Side Note: I often joke that if I had the dog first, I might not have had the kid. I mean, if I tell Zero to sit, she just sits…right then…no questions, no complaining, no whining, she just does it.  So much easier! LOL

We found Zero at our local Humane Society.  She was just under a year and a half old and had been picked up as a stray so they didn’t know anything about her.  When we got her out of her kennel and into the big yard so we could see her more, she hardly even came over to us. There was just something about her, though, and we knew she was the one.

We brought her home and the next day when we took her to the vet, learned that she had heart worms…bad. My mom reminded me that the humane society said they would take her back if it was within 72 hours but I just couldn’t do that. First, I was afraid nobody else would adopt her knowing she had heart worms, and second, she was my dog. Like we already totally bonded and I just knew she was my dog.

Long story short, we put her though the pretty intensive heart worm treatment, killed all those little buggers off and she was healthy!

We also learned that she was a pretty fearful dog…scared of so much.  She would not walk up the stairs to our apartment so I had to carry her up and down for about a month until we finally coaxed her to walk up and down the entire flight by herself.  She had no idea what the TV was and would hide behind my chair whenever it was on.  She had no idea how to play with toys. When I would try to teach her fetch and I would throw the ball she would just look at me like, “well, that was stupid…why did you do that?”.  She had no idea of anything.

To help socialize her more and build her confidence, we put her in agility with Dylan as the handler.  They did great! He was about nine at the time and they even competed and won a couple of times! After that she continued to blossom.  She learned how to play with toys, learned a ton of commands (she’s so super smart!) and she even got her CGC (Canine Good Citizen) certificate.

Other questions I get asked and more random stuff:

How old id she? 14 years old (but even the vet says she would never guess her being that old due to how healthy she is …yay!)
What type of breed is she? I don’t know for sure.  Someone asked me once if she was a kelpie. I had not even heard of that breed before so I looked it up and found pictures online that I could swear were Zero! So, by looks alone yes, I would think she is kelpie. What do you think? 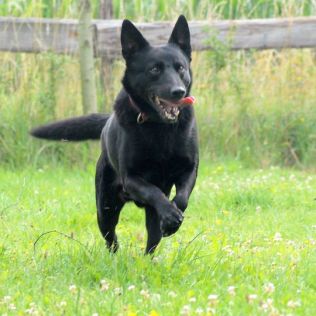 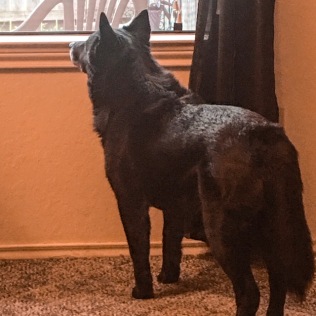 Where did the name Zero come from? One of our favorite movies at the times was ‘The Nightmare Before Christmas’ (I still jam out to that soundtrack #soGood). The main character (Jack Skellington) has a dog named…yep…you guessed it…Zero.

So there you have it; a little bit about my heart dog and my best friend. I really can’t imagine life without her.  She’s my protector, my companion, my best friend, my partner in crime…pretty much my everything. 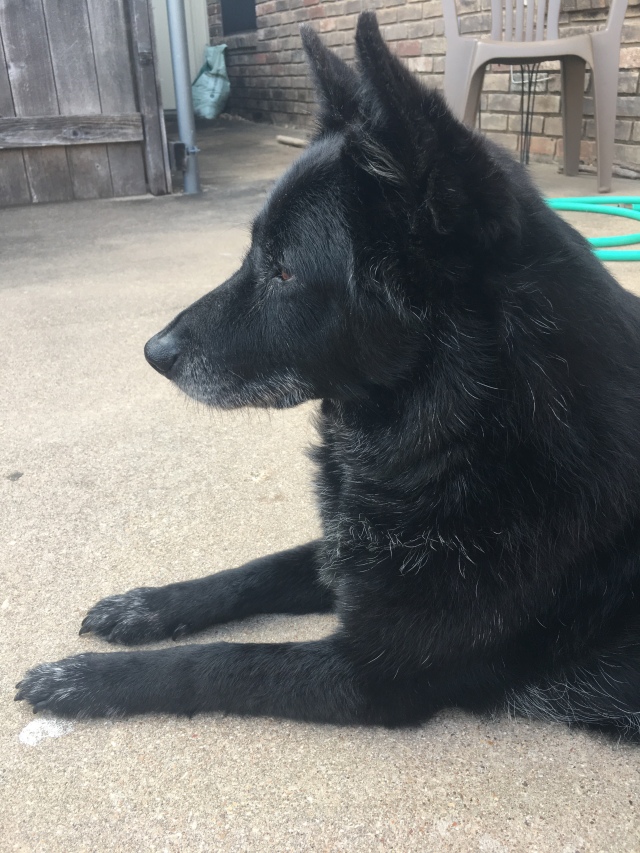 Hey all! Just wanted to say hey and let ya know I’m still around. ✌️ Been pretty busy lately working on Wild & Free Shop. Designed the new website and now working on making more creations to put ON the new site! Lol . Also been busy with the new pup, Scout. She’s awesome. Really sweet and so super smart. She’s not quite ready to go on a road adventure-still needs to learn a few manners- but we’re getting there 😀 . In the meantime I’ll be working on my business, creating new items and getting out with Scout as much as the weather permits! . Hope you have a great Friday! Any fun weekend plans? . Vagabond Scarf @wildandfree_shop . . #goodmorning #happyfriday #positivevibes #newwebsite #wildandfree #newdog #rescuedog #pawesome #scarf #accesories #vagabondscarf
So, I did a thing. ❤️ Yep, I adopted a dog and I shall name her Scout. Even though I was at peace with Z going and I felt I was ready to start the process of looking for a new dog, I wasn’t expecting to get one this soon. . But, sometimes ya just can’t ignore the universe and the signs it sends you, so...Welcoke home, Scout. . If you’re interested, there is a New Post is up that tells all the signs that led me to this little girl. ( Link in bio) @dreadlocksandbutterflies . Excited to get to know this little girl and make sure she has a happy life. ❤️ ❤️ ❤️ #rescuedog #adoptdontshop #welcomehome #positivevibes #pawsome #happygirl #furbaby #furbabylove #rescuedogsofinstagram #dogsofinstagram #doglove #goodday
Happy New Year everyone! The last part of 2019 was kinda crazy and -not gonna lie- kinda glad it’s over. I had to say goodbye to my furbaby and BFF, Zero. This was the hardest thing I ever had to do, but I have been able to make peace with it and feel like it’s all okay. . I wrote a post about how I was able to let go and and hopefully it will help someone else maybe going through this as well. (Blog Link in bio) @dreadlocksandbutterflies . Here’s to a great new 2020! . ❤️ . #newyear #newbeginnings #2020 #lettinggo #makingpeace #alwaysinmyheart #alwaysandforever #alwayswithme #heartdog #rescuedog #bff #furbaby
R. I. P. Zero ❤️ Zero, thank you for being the best dog in the entire world. Thank you for being part of our little family for thirteen years. . Dylan was only eight years old and you were just 1 1/2 yrs old when you caught our attention st the shelter and you came home to live with us. . You were so scared, shy, lacked confidence and heart worm positive. We put you thru treatment and killed those worms and we worked with you to gain trust in us. . You and Dylan started doing agility together and you really came out of your shell (even won an agility tunnels course!!). . We would all three play baseball and soccer together and you were always so fast we could never get any ball past you. . You learned how to catch a frisbee and became an awesome frisbee dog that would run like hell and jump like crazy to catch that thing! . You were always a good sport about everything. Dressing you up, putting things on you, painting your toenails, -whatever-you were cool with it. . I’m so beyond grateful that we were able to travel together for the last part of your life. I was able to show you mountains ,and prairie, lakes and rivers. You saw deer, wild bison, prairie dogs, antelope things and more and you soaked up every new experience. . We had some amazing adventures together and it made our bond we already had even that much more. . You will always always always be in my heart, baby girl. You will always be my best friend, my road dawg, and my heart dog. . We are lucky you had 15 yrs without any health issues and acted more like you were five. I’m so sad you are gone but thankful the end was quick and you didn’t have to feel bad for long. . I really don’t know how to be without you. I know time will help but right now it feels like my heart is literally broken. I know you are still with me and I just want you to know we love you Zero Marie DeVore ❤️ . - we had to say goodbye to her yesterday because she had kidney failure. It came quick (showing symptoms just this past week Due to the severity and her age, we had to let her go. ❤️ ❤️ ❤️ #byebabygirl #tillwemeetagain #rainbowbridge #bestdogever #rescuedog #whoreallyrescuedwho #mybff #furbaby #partnerinadventure
“Be happy in the moment, that’s enough. Each moment is all we need, not more. “-Mother Teresa . Living in the present moment can sometimes be kinda tough..going through life from one task to another you tend to run on autopilot sometimes. . We need to remind ourselves to slow down and be mindful of the little moments that make up our life. . Wrote a new post about what I’m doing today to be more mindful and it’s up on my blog if ya wanna check it out.. (Link in bio) @dreadlocksandbutterflies . Here’s to an awesomely mindful kinda day. ✌️ . #mindfulness #mindful #mindfulliving #bepresent #bepresentinthemoment #bemindful #hereandnow #positivevibes #feedyoursoul #soulful_moments #connect
Woke up early this morning to spend some time setting my intention for the day. . Today my intention is “to encourage and inspire by being my authentic self”. ❤️ . Setting this intention in the morning (and having little reminders throughout the day) helps my soul stay on course durning the day when things can get kinda crazy and you can lose focus. . What’s your focus for the day? ✌️ . #intention #gratitudeattitude #focusonyourself #quiettime #reflection #journaladdict #morningvibes #trueselflove #livelifefully #chasewonder #learntoloveyourself #positivity #postiveenergy